FILED UNDER autism, bragging, halloween, holidays
I really didn't think Halloween was going to happen for us.  Sandy was supposed to make the 31st nasty here, rain and wind and blah.  And as soon as the forecast called for more favorable weather, other stations started crying rain showers all night, on and off, trick-or-treat at your own risk!

But we HAD to get out of the house.  Cabin fever had set in pretty severely, and Rae had started up on her television 24/7 kick.  Apart from the health aspect, if I heard "LA-LA-LA Elmo's world!" one more time, I was going to LA LA LA myself to the funny farm.  Plus, the kids had costumes and even Scooby Doo Halloween buckets from the last McDonald's trip with grandma.

So at 4:00, when the sun started peeking out between the clouds for longer than 15 seconds, I decided we were making it happen.  Talking it over with the daddy, we planned on McDonald's for dinner, a little walk through downtown, and hitting a few houses closer to home.  We were on our way by not even 5pm. 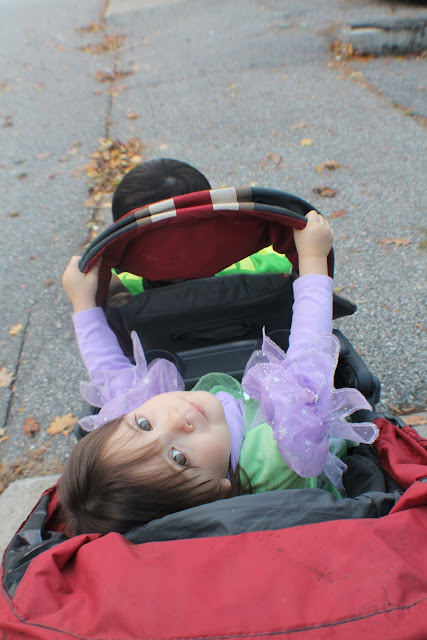 I had a moment and forgot McDonald's on Halloween evening would be a zoo.  But walking up with a fry-gobbling dinosaur in the front of the double stroller meant no matter what there was no turning back, unless we wanted a soul-crushing meltdown fiasco on our hands.  We had to forgo any high chair or booster for PX, and I held my breath when we had him take a seat in the booth.

But he sat.  On his butt.  The entire time.  Better than 90% of the other kids in the place.  And never once crawled underneath the table.  He just sat, well-manner, eating french fries and watching car after car pour into the driveway.  He didn't even beg for sips of Sprite.

We gave him some fries for the transition and began our stroll.  For the first few stops, neither knew what was going on.  Rae played coy with the firefighters but looked a little WTF at the small objects being placed in her bucket.  PX just ate his fries and tuned out the candy exchanges. 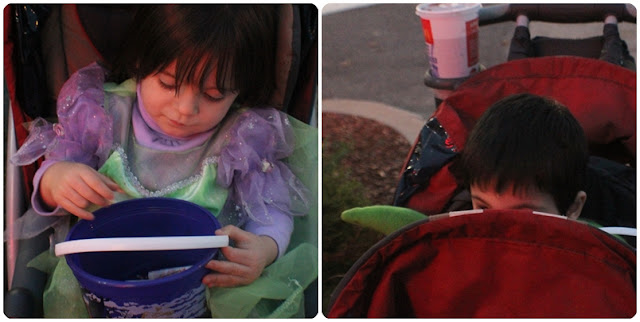 It was the second to last stop when it happened.  Outside one of the semi-assisted living complexes some residents had set up a table, with the motherload of candy bowls (ya know, huge and full of the good stuff).  As we stopped, Rae gave everyone her sweetest smile and they told us to pick out some candy while we chatted.  I grabbed some Reese's for PX and tossed them into his bucket.  The orange packages caught his eye.  HOLD UP?!

He tilted the bucket, touched the peanut butter cups, and then gently pointed to one to ask for permission to munch.   I couldn't help but oblige.

It wasn't that long ago, not even six months ago,  that he would've skipped asking and just gnawed on the package.  He probably would've thrown a fit when it didn't open.  It was only 4 or 5 months ago that we let him sit in the booth with daddy at McDonald's only to have him throw his smoothie on the floor under the table to protest the "sit on your bottom" rule and then proceed to play in it.  He has honestly come so far.

Our Halloween was perfect in its way.  It was short, and simple, and ended with PX cuddling his daddy whilst watching Charlie Brown.  I couldn't have asked for more. 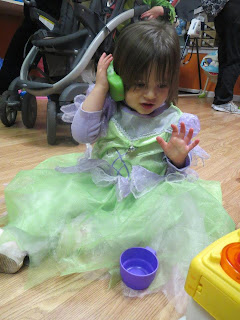 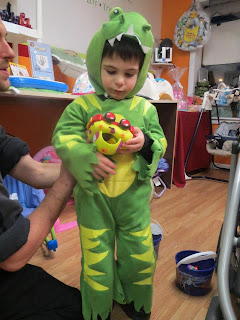 Thanks for stopping by my little corner of insanity! Here you'll find the tales of PX aka Boogie and Rae (Rizzle), two toddlers kicking ass everyday at overcoming SPD and autism, as recorded/interpreted by their sometimes overthinking and always overtired mom, Elle.